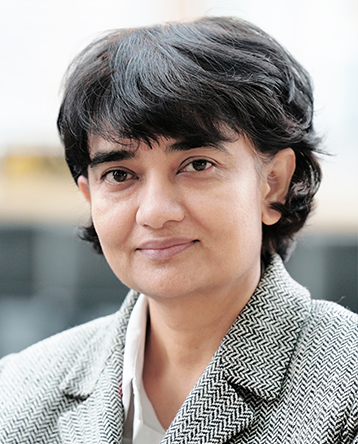 Rita Singh works on core algorithmic aspects of computer voice recognition, and artificial intelligence applied to voice forensics. Her focus is on the development of technology for the automated discovery, measurement, representation, and learning of the information encoded in voice signal for optimal voice intelligence. Speech, a highly ordered manifestation of the human voice, is also shaped and influenced by the external environment. Understanding general audio, its interplay with human voice and its contextual significance, is a vital part of her research. The final goal of her work is to enable computing machines to not only recognize the content of human speech better in general, but also to understand and respond to humans by gauging their persona, their intent, and their staus vis-a-vis their environment from their voice alone, with an acuity that surpasses that of the human brain. This part of her research represents an intersection of the areas of AI and voice forensics. She continues to work toward making voice intelligence algorithms work much better than currently possible in high-noise and other kinds of complex environments, using minimal external (human-generated) knowledge. On the periphery, she works on the general quest for more automation, powerful search strategies, and more scalable learning algorithms for voice intelligence systems.

CyLab’s Rita Singh spoke with Business Insider about an early stage project that uses artificial intelligence to analyze voice recordings to identify vocal signatures that may indicate if someone is carrying the virus.