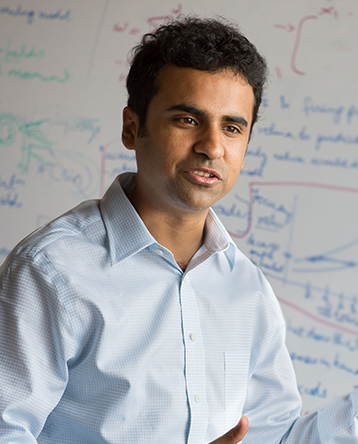 Pulkit Grover is an assistant professor in the Department of Electrical and Computer Engineering at Carnegie Mellon University. He received his Ph.D. from the University of California, Berkeley in 2010. He focuses on interdisciplinary research directed towards developing a science of information for understanding/designing energy-efficient and stable decentralized systems (from low-power communication/computation systems, to large control, computational, and biological systems). He is the recipient of an NSF CAREER Award (2014), the best paper award at the International Symposium on Integrated Circuits (ISIC), the best student paper award at the IEEE Conference in Decision and Control (CDC) 2010, and the 2012 Leonard G. Abraham best paper award from the IEEE Communications Society for his work on energy-efficient communication. For his dissertation research, he received the 2011 Eli Jury Award from the Department of Electrical Engineering and Computer Sciences at UC Berkeley.

He was a co-editor of the IEEE Journal on Selected Areas in Communications (JSAC) special issues on "Energy Harvesting and Wirelessly Powered Communications" (2014-15).

Novel Strategies for Sensing and Stimulating the Brain Noninvasively and Precisely

ECE’s Pulkit Grover was named the 2022-2023 Distinguished Lecturer for IEEE’s Information Theory Society. Grover plans to give talks in Asia, Africa, and various places in North and South America, supported by this program.

Finding silence in the brain

A research team led by Carnegie Mellon University, in collaboration with clinicians at the University of Pittsburgh, is exploring how to detect and minimize brain damage.

The College of Engineering is pleased to announce that the College will fund three Catalyst proposals as winners of the Catalyst 2020 competition.

Some biases in AI might be necessary to satisfy critical business requirements, but how do we know if an AI recommendation is biased strictly for business necessities and not other reasons?

The power of EEG and student innovation

One group of CMU researchers has a wide variety of students exploring novel uses and implementation methods for an underutilized technology: EEG nodes.

Singularity Hub featured BME and ECE researchers’ project recently funded by DARPA, in which they are using ultrasound waves to pinpoint light interaction in targeted brain regions, then measuring brain waves through a wearable “hat.”

Wearable system to sense and stimulate the brain

A team of researchers from Carnegie Mellon is starting a project to design and implement a high-resolution, noninvasive neural interface that can be used as a wearable device.